New research shows that the two common bacteria that cause respiratory tract infections, strep throat, and ear infections can actually live a lot longer outside the human body than originally thought.

Traditionally research on the survival of bacteria has been conducted in a lab with lab cultures. But recent research has shown that when bacteria infects human tissue it creates a hardy biofilm; meaning that laboratory cultures did not give an accurate picture of how the bacteria really grows.

Instead of using lab cultures, this study looked to see how long bacteria could actually last outside the body. The researchers tested items in a day care center in the morning before opening so that it had been hours before there had been any human contact. They found that four out of five stuffed toys tests positive for S. pneumonaie and several other surfaces tested positive for S. pyogenes, even though they had been well cleaned. The study showed that even month-old biofilm was able to infect colonized mice.

The findings are changing the way we think about how these bacteria spread. Traditionally research has shown that we only become infected with this bacteria when we breathe in infected droplets that have been coughed or sneezed out by others. But this new study shows that more research is needed about how bacterial colonization may cause an infection. If it is a common form of infection, we will need to take added precautions when sanitizing daycare centers, hospitals, schools, and nursing centers.

But one thing hasn’t changed. Our best defense continues to be well-washed hands. Use soap and water, and be sure to scrub your hands for at least 20 seconds. Always wash your hands before you eat or after being out in public. 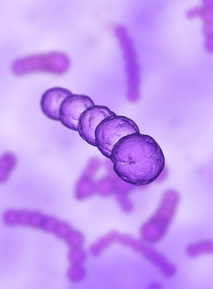