If you haven’t already, you may want to sit down and talk to your teen about the new cell phone law that went into effect May 14th. In Utah, teens under the age of 18 are no longer allowed to use their cell phones while driving. The only exceptions are if they are talking to their parents, in the case of a medical emergency, or are reporting criminal activity or a safety hazard.

Anybody who violates the law will have to pay a $25 ticket, but no points will be placed on their driving records. Hopefully the money will come out of the teens’ pockets and not their parents’. The goal is to make it costly enough that teens won’t want to risk it, but to not be too heavy handed. The law makes talking on the phone a primary offense, so officers don’t need any other reason for pulling teens over than for using their cell phones.

The law does not mention texting, which is already illegal regardless of age and is considered a misdemeanor or a felony if it causes any injuries or death.

Legislators want to use the law to educate teens and their parents on the dangers of distracted driving. In the United States more than 1,000 people are injured and nine people die every day because of car accidents caused by distracted drivers. Studies have shown that there is a similar level of impairment between drunk driving and driving while talking on a cell phone.

Teens are particularly vulnerable because they are still learning how to drive. According to AAA, teens are four times more likely to get in an accident and car accidents are the leading cause of death for people from 16 to 20 years old.

Similar laws have already been passed in Utah restricting when teens can drive and who they can drive with. Since these laws were passed in the 1990s, fatal car crashes involving teenagers have dropped by 53 percent.

Lawmakers will be using this law as a model for one that may eventually involve all drivers. They hope that teens will become examples of safe driving for all of us. 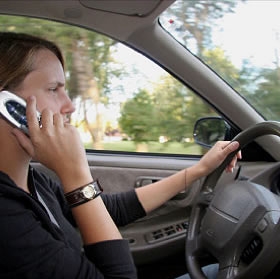