E-cigarette use among Utah teens triples in only two years

A recent report by the Utah Department of Health has shed light on a disturbing trend. In Utah, the use of e-cigarettes among teenagers has tripled in only two years.

Between 2011 and 2013, the percentage of teens who have tried e-cigarettes has risen to 12 percent with almost 6 percent using them on a regular basis. Nearly a third of those who tried e-cigarettes have never tried conventional cigarettes. The survey was taken among Utah students in grades 8, 10, and 12. At the same time, usage among adults in Utah has doubled to almost 5 percent.

E-cigarettes (also called vape pens or hookah pens) are small battery-powdered vaporizers that are made to simulate smoking. They work by turning an “e-liquid” into a vapor that is then inhaled like you would cigarette smoke, which is why it is often called vaping. The liquid usually includes nicotine and is sold in a variety of candy-like flavors.

Marketing for e-cigarettes claim that they are a safe alternative to cigarettes because they don’t expose the user or others to the dangerous chemicals and cancer-causing agents found in tobacco. But the long-term effects of e-cigarettes have not been studied and there is no proof that they are safe. Organizations like the World Health Organization, the Food and Drug Administration, and the American Lung Association are understandably leery. Many are reminded of the years tobacco companies spent insisting their products were safe.

Parents need to be aware of some of the risks associated with e-cigarettes and should take the time to talk to their children about them.

Nicotine is a serious addiction

Although you can buy e-liquid without nicotine, most is sold with varying levels of it. Nicotine is a notoriously hard habit to kick. Picking up a habit like this before you even graduate from high school means a lifelong struggle with a potent addiction. It is not something that should be taken lightly.

Nicotine is not only addictive, but it has some dangerous side effects. Besides raising your blood pressure and heart rate, it can negatively affect developing brains. Overtime it can cause heart disease, stomach ulcers, and blood clots. In fact, nicotine is used as a pesticide and one drop of pure nicotine can kill an adult. Not really something you want in your body.

The sale of e-cigarettes is not well regulated

Because e-cigarettes are so new and are not considered a tobacco product, there is little to no regulation. Although children under 19 aren’t supposed to be able to buy them, there is very little enforcement. E-cigarettes are easily available at smoke shops, gas stations, and mall kiosks. You don’t need a license to make or sell them.

Utah is still working on creating legislation to regulate the sale of e-cigarettes and many counties in Utah are starting now to develop regulations.

There is also no telltale odor left by e-cigarettes, making it harder for parents and school employees to know if teens are vaping.

There are no regulations on how e-cigarettes are marketed

Unlike tobacco companies, e-cigarette distributors are not limited in how they can advertise. Eager to build their market, companies are targeting younger crowds by offering flavors and colors that appeal to kids, distributing coupons to youth, and sponsoring music festivals where the e-cigarettes are readily available. Many of the claims made by e-cigarette distributors are false or exaggerated, making it hard for teenagers to see the potential harm in their use.

Another concern is the lack of manufacturing standards. Currently there are no regulations governing how products are labeled for nicotine content or other ingredients. And much of the product is currently being manufactured in China. Even e-cigarette manufacturers are hoping for some degree of regulation because there is such a wide variance in quality. Many distributors are selling e-liquid without even knowing what chemicals are in it or how much nicotine is actually in the product.

There has been an increase in nicotine poisonings among young children

Liquid nicotine is very dangerous because it contains highly concentrated amounts of nicotine. Not only is it harmful if swallowed, but it can also be absorbed through the skin. Even spilling it on yourself can make you sick. In the higher concentrations, less than a tablespoon is enough to kill an adult. In smaller doses children can get very sick with nausea and vomiting; more serious cases require a trip to the ER.

As e-cigarettes have become more popular, poison control centers are seeing a sharp spike in calls. Over half of those calls are cases involving children under the age of 6. Many parents or other family members are leaving their refill bottles out not realizing how dangerous it is. The colorful containers and candy flavors are especially attractive to young children, and there are no regulations requiring bottles to be childproof.

When using e-liquid or liquid nicotine, it is important to take the following precautions:
1. Always wear gloves to protect your skin from spills.
2. Store it locked up and away from children and pets.
3. After using it, make sure the container is sealed tightly.
4. Dispose of it according to the instructions on the package.

If you or somebody else has been exposed to liquid nicotine, call the poison control center right away at 1-800-222-1222.

A recent report by the Centers for Disease Control and Prevention (CDC) found that teens who have never smoked tobacco cigarettes but used e-cigarettes were twice as likely to have intentions of smoking later. Many teens may believe that e-cigarettes are an innocent habit, but in reality it could be the gateway to a much more serious addiction.

For adults who are already addicted to smoking, e-cigarettes are being marketed as a way to kick the habit. But whether or not they are effective is still up for debate.

Utah teens embracing e-cigarettes ‘left and right’ (sltrib.com)
More than a quarter-million youth who had never smoked a cigarette used e-cigarettes in 2013 (cdc.gov)
E-Cigarettes (kidshealth.org)
Utah AFP Fights for Regulation of E-cigarettes (aafp.org)
The Health Claims Of E-Cigarettes Are Going Up In Smoke (forbes.com) 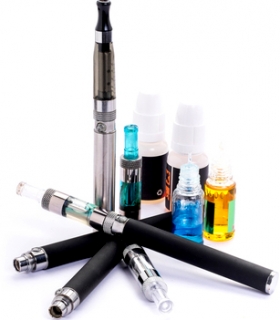