Home » Topics » Leaving a Child Unattended in a Car is Illegal

Leaving a Child Unattended in a Car is Illegal

Article at a glance:

Leaving your child alone in the car is not only dangerous, but it is also illegal in Utah. In 2011, it was made a class C misdemeanor to leave a child unattended in a motor vehicle. The misdemeanor is punishable by a $750 fine and up to 90 days in jail.

But even more serious are the potential personal consequences. Although you would never purposefully expose your child to danger, many are not aware of just how quickly the inside of a car can heat up. Leaving your infant in the car on a hot day for even a few minutes is enough to cause heat stroke.

Recently, a woman from Orem was cited for leaving her three-year old daughter in the car. Even though it was only 80 degrees outside and the window was down, police found that the temperature in the car had risen to 110 degrees.

A good recommendation is to put a teddy bear in the front seat of your car as a reminder. When you take your child out of his car seat, put the teddy bear in his spot. The next time you go to put your child in his safety seat, move the teddy bear back to the front. This will help you establish a habit that will always remind you — kids out first. 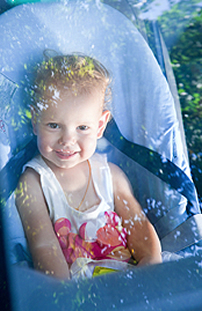