Researchers tracked 2,000 high school students over a period of at least five years. The researchers found that those who watched more than five hours of TV every day were likely to have poor diets as young adults. These young adults tended to eat fewer fruits, vegetables, and whole grains. They filled the gap in their diet with more fried foods, fast food, and sugary drinks.

Researchers believe that these trends might be caused by two factors. First, transition periods from middle school to high school and from high school to young adulthood are critical times to practice good eating behaviors. Second, teenagers might discount the importance of healthy eating because the actors in TV junk food ads targeted to teenagers usually do not look unhealthy or overweight.

– Turn off the TV at dinner.
– Turn the TV off during homework time.
– Turn the TV off when there is not anything on that you actually want to watch.
– Make your child’s bedroom a TV-free zone.
– Use TV-watching as a reward.
– Help your children brainstorm other activities they could do rather than watch TV.

It is also recommended that your children eat a healthy diet and develop a pattern of healthy eating. The following guidelines might help you incorporate more healthy foods into your children’s diet.

– Have plenty of fruits and vegetables in the house, and use them as snacks instead of unhealthier foods.
– Read the labels on foods you buy, and teach your children to understand nutrition information too.
– Model good eating behavior for your children. 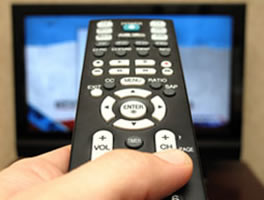