Home » Topics » 6 Vaccination Myths and Why They are Dangerous

6 Vaccination Myths and Why They are Dangerous

In 1796, Edward Jenner hypothesized that milkmaids’ apparent immunity to smallpox came from their repeated exposure to the similar but less devastating cowpox.

So, he scratched a milkmaid’s cowpox sore with a needle, then scratched a young local boy with it. Then he exposed the boy to smallpox and the boy did not get sick.

Jenner was the first to demonstrate a phenomenon that has saved countless millions of lives since his discovery: exposure to a disease can cause the body to develop immunity against future infection.

Vaccinations save lives, and there is no credible debate within the scientific and medical communities as to their effectiveness.

Among children born between 1994 (the start of the Vaccines for Children program) and 2014, the CDC estimates(2) that the modern vaccination schedule will result in 21 million fewer hospitalizations and 732,000 fewer deaths.

Vaccinations are a requirement to attend school in all 50 states, though there are a number of exceptions that allow students to opt-out. For example:

According to the 2019 National Immunization Survey, 80% of 24-month-olds in Utah have received the recommended series of vaccinations. This is a vast improvement from the 72.9% reported in 2018, and well above the national average of 71.4%.

Still, the low national average is troubling. Unvaccinated people count on the immunity of the rest of the population to protect them. Some have legitimate reasons for avoiding vaccines, but others have simply fallen victim to common myths that persist in the face of scientific evidence to the contrary. Let’s examine some of these myths and see if we can put a few of them to bed for good.

In 1998, an article appeared in peer-reviewed British medical journal The Lancet that purported a link between autism and the measles, mumps, and rubella (MMR) vaccine. Specifically, it drew a link between thimerosal, a mercury-based preservative that prevents bacterial growth in multi-dose vaccines, and the incidence of autism spectrum disorder. The study has since been discredited, and its main author, Dr. AJ Wakefield, lost his medical license because of unscrupulous practices during the study. In 2010, The Lancet retracted the article.(4)

However, the damage from Wakefield’s article had already been done. Many well-meaning and rightfully concerned parents of children with autism spectrum disorder grasped at the false hope the study provided, and they voiced their concerns to warn other parents. To this day, an erroneous fear exists in many parents that their children will acquire autism from the MMR vaccine.

But, some 20 studies have found that no such link exists(5). And further, thimerosal was removed from all vaccines intended for children in 2001. Since that time, the rate of autism spectrum diagnosis has continued to climb. As the CDC points out(6), were thimerosal responsible for autism, one would expect the opposite result. Also, the MMR vaccine never contained thimerosal in the first place.

Myth #2: Vaccines are Not Necessary Because of Modern Sanitation

Some myths persist because they steal credence from a kernel of truth. Yes, the advent of indoor plumbing has reduced the occurrence of some diseases. Less-cramped living conditions, modern hygiene, and more nutritional diets have each contributed to the reduction in child mortality rates as well. But these effects, even when combined, pale in comparison to the effectiveness of immunizations

There have been no groundbreaking advances in the fields of sanitation and hygiene since 1995. The relative density of the population remains roughly the same as well. No, the only real difference between 1995 and now, as far as chickenpox is concerned, is that most children are now immunized against the disease.

Herd immunity — or community immunity — is the term for the protection unvaccinated members of a group have from a disease because there are so many vaccinated members in the group. The more members within a population that receive immunization against a disease, the harder it is for that disease to spread. Once a certain percentage of that group achieves immunity, whether through natural means or vaccine, the group is said to have herd immunity.

We call that percentage the threshold percentage, and as this article on the CDC website(8) points out when vaccination numbers drop below it, diseases once eradicated within the population can swiftly return with a vengeance. Those who cannot get vaccinated — infants, pregnant women, people with allergies, and weakened immunity — are most at risk in the event of a disease outbreak. They depend on community immunity to keep them healthy. 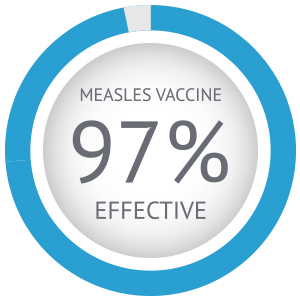 Graphs of child immunization numbers and child mortality rates have an inverse relationship: As one goes up, the other goes down. As stated, there are many reasons for the reductions in global child mortality. Immunization is one spoke in the wheel. Lower poverty rates, better-educated mothers, greater socio-economic equality, and better overall healthcare have all contributed to the lower rate of childhood deaths. The role of vaccines is hard to deny, though, considering the precipitous fall in childhood mortality since the advent of routine vaccinations.

For example, following Merck’s licensing of the first live-virus measles vaccine, the CDC announced a measles eradication plan in 1966. By 1968, measles incidence fell by 90 percent. The cause-and-effect relationship between vaccines and better health has been well-documented.

Myth #5 Vaccines Cause the Disease They are Supposed to Prevent

Some people believe that there is a risk of vaccines causing the very diseases they are designed to prevent. However, there is no need to fear this occurring. This myth likely stems from the few occurrences of the oral, live-polio vaccine causing actual polio, usually in severely under-immunized populations like third-world countries. But even that risk is incredibly rare. According to the World Health Organization, nearly three billion children have been vaccinated for polio since 2000, with only 24 cases of vaccine-derived polio occurring across 21 countries.

On rare occasions, live vaccines have been known to produce what looks like a mild case of the disease they are supposed to prevent, most often just a few spots from the measles or varicella vaccines. This is not a full-blown infection, and in fact, shows that the vaccine is working. In the case of inactivated vaccines, infection is not possible because the bacteria or virus is dead.

The myth that it is better to get a disease and develop a natural immunity to its recurrence than to get vaccinated persists in the face of logic. The seed of this myth is the fact that natural immunity often does last longer than vaccination-induced immunity, which may require booster shots to remain intact. However, consider the risks of acquiring a disease versus the minuscule risks of vaccination.

While the MMR vaccine can produce mild complications, it is 97 percent effective at preventing measles. Though many people consider measles to be a minor ailment, it can have serious complications. One in 20 children infected with measles gets pneumonia, which is a major contributor to the measles death toll worldwide. One measles victim in 1000 will develop encephalitis, leading to loss of hearing or intellectual disorders, and 1 in 1000 children who contract measles dies.

Most of the possible side effects from the MMR vaccine are mild in comparison. One in 5 vaccinated children get a fever, while 1 in 20 develop a rash. One in 3000 will develop seizures from high fever, while 1 in 30,000 will have a lowered platelet count and resulting bleeding disorder. One in 1 million will have a severe allergic reaction. Given the stakes, the acquired immunity that vaccines provide easily trumps natural immunity in terms of risk.

Copyright 2021, Utah Valley Pediatrics. All Rights Reserved.
The material provided on this website and websites linked from this site is for informative purposes only.
If you need specific medical advice or have an urgent need, please contact our office.