Home » Topics » Get Your Finger Out of Your Nose!

Get Your Finger Out of Your Nose!

Which of your kid’s bad habits drive you the craziest? We are guessing that nose picking, thumb sucking, and nail biting probably all make the list. We bet that you are also sick of telling your kid twenty times a day to get their finger out of their nose.

So to buy you some small measure of sanity, here’s the 411 on habits and how to cope with them.

What is a Habit Exactly?
A habit is a learned pattern of behavior that is repeated often enough that it eventually becomes automatic. Sometimes the person may not even realize that they are doing it.

How are Habits Formed?
Habits can form for a variety of reasons. Some habits we develop on purpose—like washing our hands every time we use the bathroom.

Some habits form out of positive association. For example, as a baby your child associated sucking with a full belly and possibly falling asleep. Those associations can continue after infancy and can manifest as thumb sucking or chewing on things when your child is falling asleep or is relaxed.

Other habits form as a way to fight boredom or relieve stress. If your son generally picks his nose while watching TV or in the car, he may be doing it because he is bored and it gives him something to do with his hands. Or if you see your daughter twirling her hair, you may notice that she has just had a stressful or upsetting experience and is trying to soothe herself.

Sometimes kids develop a habit because they have learned that it gets mom or dad’s attention. If you respond to your child every time she bites her nails, then she may have developed the habit of biting her nails when she feels ignored.

Habits also have a tendency to run in families. Studies have found that habits may be genetic or form through observing others.

Nose Picking: Sigh, unfortunately this is something grown ups do too. In fact, a study found that 91% of adults picked their noses and 8% said that they ate what they dug out. The biggest problem with nose picking is germs, nosebleeds, and the “ick” factor.

Nail Biting: About 30 to 60 percent of children bite their nails. Usually it is just the fingernails, but occasionally children will also bite their toenails. This is also another habit that often follows us into adulthood. When you bite your nails you not only put germy fingers into your mouth, but you can also cause sores on your fingers and make your nails look unattractive.

Thumb and Finger Sucking: Although children are more likely to suck their thumb, they might also suck their fingers, hands or even fists. Generally thumb suckers are 2 to 4 years old, but it can sometimes continue as they get older. Thumb sucking can lead to finger infections, teasing, and dental problems.

Hair Twirling or Pulling: Decidedly less gross than some of the others, hair twirling is when children habitually stroke, twist, or pull their hair. It is most annoying when your child develops the habit of twirling your hair instead of their own—ouch! Even though it is less common, some children may pull their hair often enough to cause hair loss. Most kids don’t continue this habit as they get older, but if you have an older child or teen who pulls their hair be aware that it can be a sign of obsessive-compulsive disorder, depression, and anxiety.

Teeth Grinding: Those first baby teeth feel pretty interesting. It is no wonder that over 50 percent of babies develop the habit of grinding their teeth. Teeth grinding mostly occurs at night while sleeping. Although it might set your teeth on edge the habit is pretty harmless and most children stop by the time they are five. But if they continue to grind their teeth once their permanent teeth come in, you will want to see a dentist about a night guard to protect their teeth.

How Do You Break a Habit?
For most kids they will eventually drop the habit on their own by the time they reach kindergarten. But if the habit is starting to negatively impact their life, you will want to look at some ways to kick the habit. Children are different, so you may have to try one or more techniques with your child. And don’t forget to be patient—it can take time to break a habit.

Reward Good Behavior: Since some children will pick up a habit to get attention, try giving more attention for good behavior instead. And for many children using rewards like sticker charts, prize boxes, and promises to do a fun activity together can provide a lot on incentive. The trick is to find something that your child is excited about.

Stay Calm: If your child is engaging in a bad habit, resist the urge to lecture, punish, or scold. Instead, just calmly remind your child that you don’t like the behavior and why. For example, “I don’t like it when you pick your nose. It spreads germs.”

Work Together: If your child is getting teased about sucking his thumb, he is probably as anxious to kick the habit as you are. Find ways to let your child know that you are on his side and are here to help. Instead of imposing a particular method for breaking the habit, talk to your child about things that he thinks will work best. Working together helps children learn important skills on how to break bad habits. You are also more likely to be successful if your child is committed to the process too.

Distraction: Instead of focusing on the negative, try suggesting an alternative behavior. Instead of nose picking, suggest wiggling their fingers. Or you can distract them with a new activity to keep them busy—like a craft or game.

When Should I Be Worried About a Habit?
Usually habits are nothing to be worried about and children will outgrow them on their own. But sometimes habits can be indicators of something else or they may have serious consequences. For example a nose picker might actually have something stuck up there, a nail biter might start to get nail infections, or a hair puller might start to lose hair.

If a habit is preventing your child from functioning normally on a daily basis, causing medical problems, or impacting their social interactions, then you might want to talk to your pediatrician. 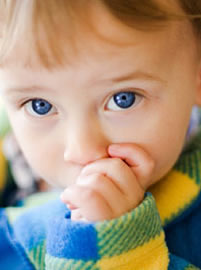