Gun safety is something that every parent should take very seriously. Firearms are one of the leading causes of intentional and unintentional death among children in the U.S. Unfortunately many households do not store their firearms properly.

A study found that 34 percent of children in the United States lived in a home that had at least one firearm. In about 13 percent of these homes, at least one gun is stored in a way that makes them accessible to children.

Children are particularly vulnerable to gun accidents because of their natural curiosity. Children learn by touching, grabbing and using. Even when taught about gun safety, studies have shown that children rarely respond the way they have been instructed. Their fascination with guns and inability to fully comprehend the danger make a dangerous combination.

That is why securing your firearms is the best way to prevent accidents. You cannot guarantee what your child or their friends will do if they stumble on a gun.

If you own a gun, be sure it is stored properly

All children should be taught gun safety

Whether you have a gun in the home or not, it is important to teach your children about gun safety. Many accidents occur when a child finds a gun in the house of a friend or relative.

Households with teens are less likely to store their guns properly, but most firearm injuries happen to teens. Studies have also shown that teenagers who have a gun in the home are more likely to commit suicide. Even if your teenager is used to guns and knows how to use them, it is wise to keep them inaccessible. 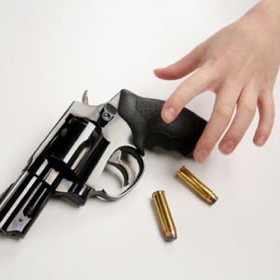