Home » Topics » Have You Ever Heard of Binge Eating Disorder?

Have You Ever Heard of Binge Eating Disorder?

Most parents know to keep an eye out for eating disorders like bulimia and anorexia, but few have heard of another common eating disorder — binge eating. People with the disorder have frequent episodes of eating abnormally large amounts of food. They feel unable to control what and how much they are eating. The disorder is often accompanied by eating very quickly, eating until uncomfortably full, and feelings of guilt, disgust, and embarrassment over how much they have eaten.

The disorder has some real risks and it is not something your child will just grow out of. Most adults with the disorder began having problems during childhood or adolescence. People with the disorder are generally overweight and have a higher risk for problems like diabetes, high blood pressure, high cholesterol, gallbladder disease, heart disease, cancer, depression, and anxiety.

It can often be hard to tell if your child is suffering from binge eating disorder because children are notorious for eating a lot, especially when going through growth spurts or when involved in sports. Children and teens who struggle with the disorder often feel guilty or embarrassed and will frequently binge in secret, making it even harder for parents to tell how much they are eating.

So how do you distinguish a healthy appetite from a problem with binge eating?

It’s important to be sensitive to your child. Many children and adolescents are very embarrassed by their binge eating and won’t be ready to open up right away. Playing off their guilt and embarrassment will also not help them develop a healthy relationship with food. Be sure to encourage healthy eating habits by being a good role model and not using food as a reward.

The road to recovery is a long and hard one; it is a good idea to get all the help you need. Many parents find it helpful to join a support group or to read up on the disorder. Although it won’t be easy, helping your child avoid a lifetime struggle with food is well worth it. 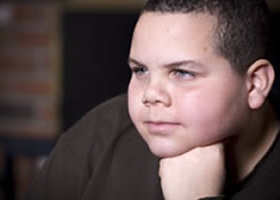