Home » Topics » Having the TV on Disrupts Toddlers From Normal Play

Having the TV on Disrupts Toddlers From Normal Play

We all know that the American Academy of Pediatrics recommends no TV for children under two. But what about letting the TV play in the background, especially when your child seems to be paying little attention to it? Nope, your best bet is to keep it off.

A study by researchers at the University of Massachusetts Amherst has shown that playing the TV in the background reduced young children’s ability to focus on playing and the amount of time they spent playing with a toy. It also reduced how many of the available toys they played with. Even though children were only watching the TV for a few seconds at time, the TV still had an impact on their behavior.

While the effects might appear small, homes that have the TV on all day or for significant parts of the day run a substantial risk of disrupting their young children’s behavior and development. The researchers were concerned that effects “may have a cumulative impact through large amounts of exposure at home. These may include poorer cognitive and language development and attention deficit symptoms.”

So take that extra step for your children. Don’t just limit time watching TV; turn off the TV completely.

A new reason to turn off the tv 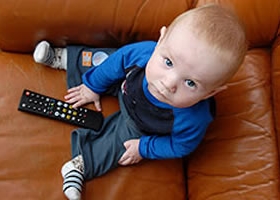