Sleeping with a smartphone can disrupt your child’s sleep

Children who sleep with a smartphone in their bedroom are probably missing out on some much needed rest.

Previous studies have found that having a TV in your child’s bedroom can reduce the amount of sleep your child gets, but this most recent study was one of the first to look at how having a smartphone or tablet in the bedroom effects your child’s sleep.

The study looked at over 2,000 elementary and middle-school students and asked them questions about their sleep routine, how well-rested they felt, and how often they had a small screen device or TV in their bedroom while sleeping.

This is what they found out:

Although the study didn’t track the reason behind the poor sleep habits, small screen devices can disrupt your sleep in a variety of ways. Previous studies have shown that exposure to screens that emit blue light can disrupt your sleep patterns. Unlimited access to content on the Internet can also be a tempting distraction from sleep. Plus small screen devices can interrupt sleep when getting calls, texts, or alerts.

Parents would be wise to keep any kind of screens out of their children’s bedrooms. Getting enough sleep is an important part of a child’s mental and physical development. Not getting enough sleep can effect school performance, lead to health problems like obesity, contribute to many learning and behavioral problems, and negatively impact your child’s long-term health. 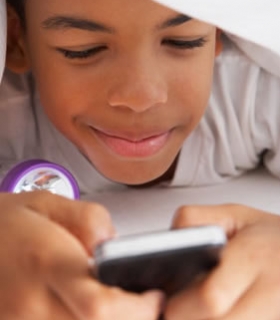