Article at a Glance
• Study highlights the potentially fatal risks involved in allowing players to continue participating in a sport after suffering from a suspected concussion or head injury.
• “Second-impact syndrome” occurs when an individual suffers a second head injury following an unhealed concussion. This second impact can result in a catastrophic swelling of the brain.
• It is important for coaches, parents, and children to be aware of the risks involved with concussions.

Although fairly rare, the sudden death of a young athlete can be extremely traumatic for families and communities. Most studies on the subject have focused on cardiovascular causes, but a recent study published in Pediatrics focuses on deaths caused from blunt trauma.

The study used information from the National Registry of Sudden Death in Young Athletes, which lists sudden deaths among athletes 21 and younger. The study found that out of 1,827 sudden deaths listed from 1980 to 2009, 261 were from trauma-related injuries. Football was the most common sport with 148 deaths.

According to the study most of the deaths could have been prevented with better equipment; changes to blocking and tackling rules; and, most importantly, better guidelines for when athletes should resume play after suffering a concussion.

Of special interest was a subset of 17 football players who died from a second head or neck injury after already sustaining concussions days or weeks beforehand. In some of the cases the athletes were cleared to play even though they were still showing symptoms from their previous head injury. The deaths were consistent with what is called “second-impact syndrome” where the brain swells rapidly following a second, unhealed concussion. These cases illustrate the risk involved with allowing players to continue participating in a sport after suffering a suspected concussion or head injury.

The study’s findings support an already ongoing effort to improve guidelines regarding when athletes can participate in a sport after a concussion. It is important that coaches, families, and athletes be aware of the potentially fatal consequences.

Epidemiology of Sudden Death in Young, Competitive Athletes Due to Blunt Trauma (Pediatrics) 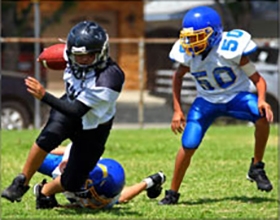