Of particular concern is the increase in concussions among girl athletes. In sports that are played by both boys and girls, like soccer and basketball, girls have a higher rate of concussions. Even cheerleaders have seen a 26 percent rise in concussions from 1998 to 2008.

A Culture of Resistance
Many cite a “culture of resistance” as the reason for such a dramatic increase. Organized youth sports are getting more and more competitive and children are starting earlier. Children are also being encouraged to focus on one sport instead of trying a variety of sports. As a result children, parents, and coaches can become heavily invested in the sport. The desire to win and excel can often cloud our perspective.

Children often worry about letting their team, parents, or coach down, so they will keep quiet about their symptoms to get back into the game. And when you spend a significant part of your life practicing and focusing on a particular sport, it is hard not to let your self-esteem and sense of identity become strongly tied to your performance in that sport.

There is also pressure to play more aggressively, putting children at a great risk of injury. Particularly among girl athletes, we are seeing more aggressive play than we have in the past.

Importance of Early Treatment and Prevention
Even though we understand now more than ever how dangerous concussions can be, the damage is often underappreciated and many concussions are not properly treated.

Early treatment is important because it decreases the likelihood that children will sustain serious and long-term damage. After a concussion some of the symptoms like headaches, dizziness, blurred vision, and nausea can continue for years after the injury. In severe cases, children can even lose some of their intellectual abilities.

Prevention is also essential. Young athletes who have had one concussion are more likely to have another one. Also, sustaining multiple hits can do even greater damage. Brain scans have shown that the way the white brain matter appears changes when it has been hit repeatedly. Young brains are particularly vulnerable because they are still growing and developing.

And wearing a helmet is not a guarantee that you won’t get a second concussion if you head back into the game. Helmets can help prevent skull fractures and other injuries, but a recent report shows that they do little to protect against concussions. It is still very important to wear a helmet, but they do not make you invincible.

For girl’s, health experts are particularly concerned about soccer. Currently it accounts for the second largest amount of concussions in young athletes. One of the most dangerous parts is heading the ball. When vying for the ball, players can knock heads together if they collide. Although boys run the same risks with soccer, it seems girls run a greater risk for a concussion because their necks are typically longer and thinner.

Preventing Concussions
Sports are an excellent way to get exercise and they can have a positive effect on a child’s self-esteem, but we have to be careful about how our children play sports. Parents and coaches need to make sure their children are learning how to play properly and safely. Practice and games should be age appropriate, and winning a game should never come before the health of a child. Efforts to educate people about the symptoms and dangers of a concussion are particularly important.

Last year the American Academy of Neurology released new guidelines for the evaluation and management of sports-related concussions. Parents should become familiar with these guidelines so that if their child experiences a head injury they can make sure it is treated properly. 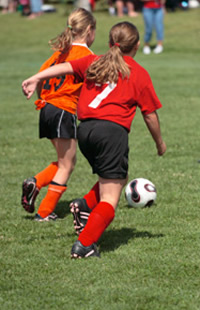