A newly released study from Children’s Medical Center Dallas and Dr. Nina Mizuki Fitzgerald reveals just how dangerous airsoft, paintball, and BB guns can be in the hands of kids. The study, which examined medical records at the hospital over a five year period, included 288 children injured with pellet guns.

The average patient treated for these gun injuries was just eleven—two years younger than the minimum age suggested by most manufacturers.

The takeaway is, according to Dr. Fitzgerald, that children using these guns should always be supervised and always wear eye protection.

For families that choose to play with pellet guns, the American Academy of Pediatrics advises that parents require kids wear eye protection that meets federal safety standards. Further, they advocate playing only on designated commercial fields where safety rules are enforced.

Another point manufacturers take pains to stress is that these guns are highly realistic and may be confused for the real thing by law enforcement. The orange tip denoting them as toys is a federal requirement and should never be colored over or removed. Finally, they suggest toy guns be handled with all the same safety precautions as real guns, including never using with them on public property like parks or schools. 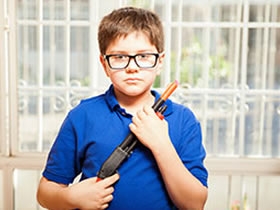