Reasons for Parents to Quit Smoking

Quitting smoking can be hard—70 percent of smokers want to quit smoking but haven’t been able to. On average, smokers try to quit four times before succeeding.

If you or somebody you love needs a little more convincing, here are some things you need to know about what the habit might be doing to the children in your life.

Neurological Risks: Exposing children to cigarette smoke has neurological risks. Children’s brains are still developing in utero and when they are young. Exposing them to the toxins in cigarettes can negatively affect their brain development.

Smoking while pregnant increases the risk that your child will have behavioral problems by the age of 4. And exposing your children to even minimal amounts of secondhand smoke can lead to antisocial and aggressive behavior. Studies have found that children who have been exposed to secondhand smoke are more likely to have reading problems and other learning disorders.

Developing Lungs: Secondhand smoke is particularly dangerous to children because their lungs are still developing. If you smoke, your children are more likely to:

Secondhand Smoke is More Dangerous: Secondhand smoke actually contains more carcinogens than mainstream smoke. The particles are also smaller, making it easier for them to get into the lungs and cells.

Thirdhand Smoke: We have all heard about the dangers of secondhand smoke, but the danger doesn’t end when the cigarette is put out. In what is called thirdhand smoke, the residual nicotine and other chemicals stay on your clothes, your hands, your hair, and any surrounding surfaces. Even if you smoke outside, at work, or in your car, it can still harm your children. Toddlers and small children are the most susceptible because they are more likely to stick things in their mouths and introduce the toxins into their bodies orally.

Thirdhand smoke is very hard to remove and sticks around long after the smoking has stopped. In some studies, it could still be detected two months later. Vacuuming, wiping and ventilation do little to help. The residue also becomes more toxic over time. The only solution is often to repaint and recarpet.

Be There to Meet Your Grandkids: Giving up smoking can add seven years to your life. One out of two smokers die from a smoking related disease.

House Fires: Careless smoking is the leading cause of fire deaths. Most often it is not the smoker who dies, but the children in the house.

Setting an Example: Smoking makes it more likely your child will become a smoker. By quitting now, you make it so that your child is less likely to have to struggle with the same addiction.

Save Money: Smokers spend an average of 14 percent of their income on cigarettes. Depending on how much you smoke and how high the cigarette taxes are in your state, this can be even higher.

In England, a study by Pfizer showed that 17 percent of smokers cut back on their children’s essential needs to fund their habit. To pay for cigarettes, 50 percent engaged in dishonest and reckless behavior, some even stealing money from their children.

Protecting Your Unborn Child: The toxins in cigarettes can affect prenatal development. Smoking while pregnant increases the risk that your children will suffer from SIDS (sudden infant death syndrome), obesity, lung problems, low birth weight, developmental delays, and premature birth. After your child is born, toxins from smoking can be transferred through your breast milk.

If you or somebody you love needs help quitting, see your doctor. Smokers are four times more likely to quit with the help of a healthcare professional rather than trying to go it alone. You can also call 1-800-QUIT-NOW or visit http://smokefree.gov. There is a lot of free help out there and you don’t have to do it alone. 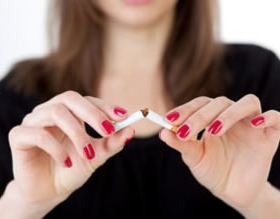