Will running around outside help your child do better on her upcoming test? A growing field of research is saying that it will. Studies are showing that students who engage in physical activity do better in school.

“It’s not only Johnny’s getting fat, and heart disease down the road — all that’s true. But it’s also that he might not do as well in school,” says James Pivarnik, president-elect of the American College of Sports Medicine (ACSM) and a professor of kinesiology at Michigan State University in East Lansing.

A study by the Centers for Disease Control and Prevention of more than 5,000 students in kindergarten through fifth grade showed that girls who participated in 70 to 300 minutes of PE a week scored higher than girls who spent fewer than 35 minutes. Another study presented at the American College of Sports Medicine (ACSM) found that middle-school students who performed better on fitness tests also performed better academically.

Experts think that exercise helps improve academic performance by:
• Allowing children to focus better by burning off excess energy.
• Improving self-esteem and mood.
• Helping with memory and concentration by increasing blood flow to the brain.

Although not all children are jocks, it is still important for them to be active. As a parent you can help by making sure your child is getting enough physical activity in PE and recess. Sports can also help, but sometimes plain-old free play at the playground or in your backyard can be even better. Organized sports often involve a lot of time standing in line waiting for batting practice or sitting around on the bench.

Being physically active helps with homework

Want to boost kids’ grades? Get them moving 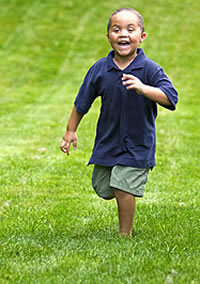