We all want our kids to have friends and be well liked, but teens who place too much focus on being cool could be in for some problems.

According to a recent study from the University of Virginia, teens in their early adolescence who are hyper-focused on being cool are more likely to have problems with substance abuse, criminal behavior, and managing social relationships.

As we help our kids navigate these tricky teen years, it is essential to teach them that it is much more important to be a good friend than to be the center of attention. Parents need to help support age-appropriate activities and not worry if their child isn’t popular.

The study followed 184 teens from different social, racial, and ethnical backgrounds. From the age of 13 to 23 they gathered information from the teens, their parents, and close peers in order to track their social status and other behaviors.

During early adolescence the study found that behaviors like delinquency, romantic involvement, and surrounding yourself with good-looking peers were thought to make somebody cool. But over time teens once seen as being cool suffered socially. Their social status often dropped in high school and by the time they reached young adulthood they were seen as socially immature by their peers.

“It appears that while so-called cool teens’ behavior might have been linked to early popularity, over time, these teens needed more and more extreme behaviors to try to appear cool, at least to a subgroup of other teens,” says Joseph P. Allen, Hugh P. Kelly Professor of Psychology at the University of Virginia, who led the study. “So they became involved in more serious criminal behavior and alcohol and drug use as adolescence progressed. These previously cool teens appeared less competent—socially and otherwise—than their less cool peers by the time they reached young adulthood.”

Why have these teens struggled so much? It could be for a variety of reasons. Focusing so early on what was perceived to be mature behavior could have caused them to miss some critical developmental milestones. Also being popular at any age carries a lot of stress. For these young teens it could have been more of a burden than they were ready for. Add to that their tendency to place themselves in situations they aren’t developmentally ready for yet, and it is a recipe for trouble.

While these behaviors show a tendency towards having problems later in life, it is not a definite predictor. Many of the teens in the study who had problems earlier, grew up to be responsible adults with good jobs. But they are warning signs parents should be aware of.

Remind your children that most people want to be seen as popular and cool, but a real sign of maturity is understanding who you are, what your values are, and what is really important in life. 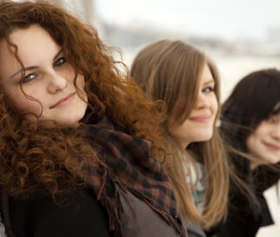