Music lessons not only teach your children how to play music; they also make them smarter. A recent study from Northwestern University in Illinois shows that taking music lessons improves the way children’s brains process language; giving them a significant leg up in school.

The study takes place at the Harmony Project, a program that gives free music lessons to students living in low-income and gang-infested communities. Margaret Martin, the founder, noticed that students in her program were not only learning how to play music, but they were doing better in school. Even though dropout rates in their neighborhoods were 50 percent or more, 93 percent of her students were graduating from high school in four years and going on to big universities.

Although the program attracted motivated students and gave them a safe and nurturing place to go after school, Martin believed that there was something else contributing to their success. She believed that learning to play music was helping them do better in school.

When Nina Kraus, the lead researcher, found out about the project and its success she became interested. For the next two years her team tracked changes in the brains of 44 children who were enrolled in the program.

The team found that learning to play music helped the children process things like pitch, timing, and timbre, which allows their brains to make sense of words more quickly. This leads to improvements in reading and language skills. A previous study by Kraus also shows that music improves children’s ability to concentrate, remember, and focus.

Notably, the study found that to see the benefits you have to actually play music, not just listen to it. Changes to the brain also take time. The study found that one year of music training didn’t make a difference, but two did.

Although more research is needed, the study is causing people to relook at the value of making musical training a part of our schools’ curriculum. 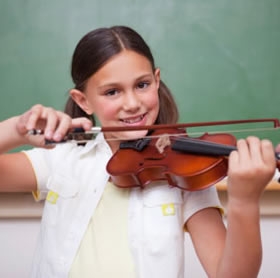