Home » Topics » You Are What You Watch: Violent TV Shows Lead to Aggressive Behavior

You Are What You Watch: Violent TV Shows Lead to Aggressive Behavior

Children learn through imitation. So it shouldn’t be surprising that aggressive programming leads to aggressive behavior. Reducing temper tantrums and fighting can be as simple as changing the channel or turning off the TV.

In an effort to better understand how TV affects our children two recent studies, some of the largest and most authoritative of their kind, have shown a link between television watching and aggressive and anti-social behavior.

Children who watch more TV are more likely to engage in long-term antisocial and criminal behavior
In New Zealand, researchers followed a group of 1,037 young people. From the ages of 5 to 15, they monitored how much TV each individual watched. The study found that the more TV children watched, the more likely they were to have a criminal conviction, to be diagnosed with an antisocial personality disorder, or to exhibit aggressive personality traits in early adulthood. The risk increased by 30% for every hour that the children watched TV in a day. The researchers found that the correlation was not explained by factors like gender, socio-economic status, previous antisocial behavior, or parenting.

Experts are careful to state that this doesn’t mean that the TV is going to turn your child into a criminal. The study just shows that the two are correlated, not that TV is the direct cause. But the researchers stressed that the study does suggest that reducing time in front of the TV could help lower rates of antisocial behavior in our society.

Changing what your child watches can improve behavior
A study from the University of Washington shows that watching television shows with a prosocial message helped improve children’s behavior. The study was a randomized trial of 565 parents with children from the ages of 3 to 5. They were split up into two groups and both were asked to track their children’s TV viewing. The control group was not given any direction on what to watch, but the second group was encouraged to watch positive shows. This group was also encouraged to watch TV with their children and instructed on how to talk to their children about ways to deal with any conflict in the shows. The total reported time spent watching TV did not differ between the two groups.

The researchers evaluated parents after six months and then after a year. Parents from the second group reported that their children were less aggressive based on measures of social competence.

What does this mean to parents?
Over the years, study after study has shown the negative impacts of watching too much television, including:

Due to the risks, for years the American Academy of Pediatrics has recommended that children only watch one to two hours of TV a day. But many parents aren’t listening. Over the years the amount of time children spend watching TV continues to steadily increase. Technologies like the smart phone and streaming video have made media more and more a part of our lives.

So experts are starting to look for some kind of intervention that will work. They are not giving up on the hope that parents will turn the TV off, but if parents aren’t going to limit screen time experts at least want to change what children are watching.

Advice on screening your children’s screen time:
Set limits to what kind of programming your children can watch. Avoid shows that show aggressive behavior or topics that are not age appropriate. Look for shows with a prosocial message that focuses on themes like loyalty, friendship, family, and appropriate conflict resolution. Sites like http://www.commonsensemedia.org/ are helpful for parents who want to evaluate music, movies, video games, books, apps, and TV shows.

It is important to make sure even prosocial shows are age appropriate. Just because a TV program shows appropriate conflict resolution does not mean that your child is ready to process what is going on. For example many shows start with a conflict that is then only appropriately resolved at the end of the show. Many young children might not have the attention span to watch until the end of the show or to make the connection with the resolution at the end.

Watch TV with your child and ask questions. If there is a conflict, ask your child about how to appropriately resolve it and talk about some of the consequences to the choices the characters are making. This is a good way to make sure your child is coming away with the appropriate message.

Track what your children watch with a media diary. It will give you a more accurate picture of how much your children are watching and what they are being exposed to. Some video streaming services make this easier by tracking the history for you.

Put your money where your mouth is. Support organizations that produce kid-friendly content. And if your TV station airs inappropriate ads during cartoons, make sure to speak up. 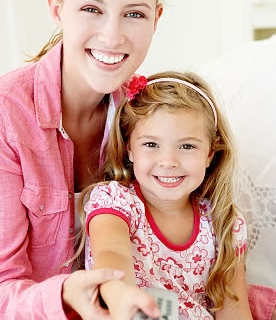