Home » Topics » What you need to know about eating disorders

What you need to know about eating disorders

Unfortunately it isn’t unusual for children, especially teens and preteens, to feel self-conscious about their bodies. One survey found that among girls 9 and 10 years old, 40 percent have tried to lose weight. Another study showed that 53 percent of 13 year-old girls are “unhappy with their bodies.” By the time they are 17, this figure grows to 78 percent.

Eating disorders are serious and can interfere with your child’s daily life and healthy development. Obsessions with food and eating can take over a person’s life. And eating disorders can cause health problems like malnutrition, dehydration, heart problems, and kidney failure. In extreme cases they can lead to hospitalization or even be life threatening.

It is estimated that about one thousand women die each year from anorexia and that one out of ten women in college has an eating disorder.

What are the most common eating disorders?

Anorexia: People with anorexia have a distorted view of their body weight and shape. Even when they are severely underweight, they still feel overweight. As a result they use extreme measures to control weight gain like excessively limiting calories, extreme exercising, fasting, and an inappropriate use of laxatives or other unhealthy dieting techniques.

Bulimia: Like anorexia, people with bulimia fear gaining weight and have a negative perception of their body. However, their weight does not typically get as low as with anorexia. People with bulimia feel guilty about eating, but they also feel like they can’t control how much they eat. This results in a cycle of binge eating (eating large amounts of food) and purging (getting rid of the extra calories by inducing vomiting). However, not all people with bulimia use vomiting to purge calories. Some will use methods like laxatives, excessive exercise, and other unhealthy dieting techniques to get rid of the calories quickly. Bulimia can cause stomach pain, tooth decay, and kidney and stomach damage.

Binge-eating disorder: People with a binge-eating disorder have frequent episodes of eating unusually large amounts of food. They feel unable to control what and how much they are eating. The disorder is often accompanied by eating very quickly, eating until uncomfortably full, and feelings of guilt, disgust, and embarrassment over how much they have eaten. People with the disorder are generally overweight and have a higher risk for problems like diabetes, high blood pressure, high cholesterol, gallbladder disease, heart disease, cancer, depression, and anxiety. (learn more)

How are eating disorders caused?

Eating disorders can develop from a variety of things—genetics, social pressure, traumatic experiences, and psychological issues like anxiety or obsessive-compulsive disorder. The most common age for an eating disorder to start is 11 to 13, but they can also start sooner. Girls are more likely to develop an eating disorder than boys. Eating disorders sometimes surface when people feel out of control and seek to establish a sense of control by focusing on their weight.

What are some signs of eating disorders?

It is normal for kids to be worried about how they look, but parents should be worried if children:

What should I do if I think my child has an eating disorder?

If you think your child has an eating disorder, get help. Children can be better at hiding things than you think, so be observant and trust your instincts. Eating disorders are serious and can be life-threatening. These behaviors aren’t easy to stop without help and the earlier you intervene, the better. Both you and your child will need help.

People are usually defensive when confronted with an eating disorder and may not be willing to admit it, even to themselves. But it is important to insist on getting help even if your child doesn’t want it. (How to talk to somebody about an eating disorder.)

How can I prevent eating disorders?

Parents can help prevent eating disorders by helping their children build a health body image. The best way to do this is to teach your children that healthy is more about how they feel and less about how they look. The reason for eating healthy and being active should be to grow up strong and healthy, not to obtain an ideal weight or body shape. Parents should also avoid power struggles over food and being overly critical about their own physical appearance.

But if your child has a problem, don’t wallow in guilt or get stuck on what you might have done to cause it. Eating disorders are complicated and research indicates that they have a strong biological root. Instead of assigning blame, focus your energy on getting the help your family needs. 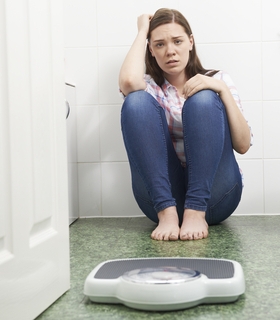