Educators know that children who enter kindergarten with a bigger vocabulary tend to do better throughout their entire school career. Parents are encouraged to read and talk to their child frequently to build their vocabulary. But researchers have also discovered another step you can take to help toddlers build vocabulary—using gestures.

Long before toddlers learn to talk, they become experts at conveying their meaning through gestures like pointing, waving, and clapping. Researchers have found that these gestures are an important precursor to talking. In studies, toddlers who were more skilled at communicating with gestures at 14 months old had a larger vocabulary than their peers as they entered kindergarten.

Because how much a toddler gestures correlates with how much their parents gesture, it’s important to lead with your example. You don’t have to teach baby sign language or even American Sign Language. Instead, just focus on using gestures to help narrow the possible meanings of your words.

Imagine your toddler is a visitor in a strange land. They don’t know the language, so telling them to put on their sock may not register a response. But holding a sock up, and miming the act of putting it on while you speak provides clues to narrow the meaning of the words. Toddlers can pick up words faster because their meaning is made clearer and reinforced visually.

You can also help build your toddler’s vocabulary by responding to their gestures with words to help link the two. If your child points at the cat, you can say, “Yes, that’s the cat” and comment on the cat’s behavior. “Look, the cat jumped onto the couch! Silly cat.”

In addition to all the connections toddlers form when they can tie gestures to words, gestures also help focus the listener’s attention. That alone is a learning aid since small kids are so easily distracted. Gesturing is even a strategy you might find useful for your school-aged kids! 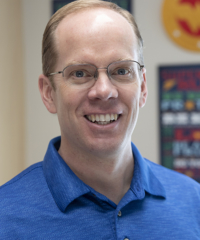 As a pediatrician and father of six kids, Dr. Bartholomew has a lot of experience with twins and premature infants. In addition to getting to know his patient families, he enjoys the great outdoors, Dr. Seuss, and BYU football.

Having the TV on Disrupts Toddlers From Normal Play