Utah Valley Pediatrics
We specialize in the care of children, from infants to teens.

How to use video games for good, and prevent addiction.

Article at a Glance
• Video games can be used to help improve test scores, teach life and job skills, improve brain function, and encourage physical exercise.
• Most popular video games and apps are addictive by design
• Because video game addiction can negatively impact social and physical health, parents should be aware of the symptoms.

Kids have been wild about video games for decades. But the introduction of mobile game systems and smartphone apps took that to new heights.

Mobility brought gaming into the car, the bedroom, and even to the bus stop. With roughly 95% of U.S. teens owning smartphones, it’s hard to find a kid who isn’t playing some kind of game.

Although video games get a lot of bad press, they do have some benefits. The trick is to strike the right balance of good content and appropriate limits. After all, video games should enhance your child’s life, not take it over.

Studies have found that video games can improve learning. When video games have been used in the classroom, teachers see improved test scores. Games also allow students to learn and then apply what they have learned in a real-life situation. Medical and military training programs both use simulation-style games to teach tools and strategy.

Many video games teach kids how to delegate, work as a team, and prioritize. Internet-enabled games that let kids play with their real-life friends often require collaboration and division of tasks to beat the level.

Video games have been shown to help us improve our ability to reason and solve problems. They help us make split-second decisions, process information more quickly, and multitask effectively. Games can also improve hand-eye coordination and boost auditory perception.

Motion-controlled games like the Nintendo Wii were once thought to be the answer to parental concerns about video games leading to obesity. But studies have shown these video games alone don’t increase kids’ overall activity level.

However, there is some hope in the form of smartphone games that encourage kids to leave the house. Pokemon Go is one example, but your kids may also enjoy the real-life treasure hunt appeal of activities like Geocaching. Some apps like The Walk, blend storytelling and exercise to get players moving.

The Federation of American Scientists (FAS) argues that kids need to play more video games in order to be competitive in the current job market. In a report they released in 2010, the FAS said games helped teach higher-order thinking skills like problem solving,  interpretive analysis, and more.

While every other study seems to draw opposite conclusions about the social effects of playing violent video games,  studies involving brain scans are concerning.

Even though the debate continues, be aware of how violent games affect your children. If you notice a problem, go with your gut.

Help your children choose games you feel are appropriate. Many console game ratings include detailed information about the contents of the game’s violence level, language, topics, etc.

What makes video games addictive? Playing releases dopamine into our systems, which gives us a feeling of pleasure and tells our brain to “do it again.”

In fact, video games are designed to be addictive. John Hopson, a games researcher at Microsoft Game Studios is also a doctor of behavioral and brain sciences who writes about game design.

In “Behavioral Game Design” he explained how game designers can control behavior by providing simple stimulus and rewards at strategic times and places.

Children with poor impulse control or who have a hard time fitting in are most vulnerable to game addiction. This may be because video games offer an easy way to fill the void created when real-world relationships are hard to form.

Be aware of how much your children are playing video games and if it’s replacing or negatively impacting other aspects of their lives.

Kids with internet-connected games can easily “hang out” with friends after school without ever leaving home. But this type of virtual get-together is no replacement for actual face-to-face interaction.

Setting aside the potential problems of online predators and cyber-bullying, virtual hangouts rob kids of the opportunity to practice their social skills and to move their bodies from one house to another.

Our Role in Video Games

Video games can play a positive role in our children’s lives, but we need to be there to help set limits.

If you’re worried that your child is becoming too obsessed with games, then it is time to sit down and talk. Be sensitive and nonjudgmental. Try to agree on a reasonable amount of space for video games to occupy in your family life.

If you need help, enlist your pediatrician. He or she may have great tips and can even recommend a therapist who specializes in tweens or teens.

Remember, even though video games have their place, they should occupy less time than what kids need to devote to exercising, socializing, studying, and sleeping. In our ever-more-connected world, we could all use a little more practice just being unplugged.

As a pediatrician and father of six kids, Dr. Bartholomew has a lot of experience with twins and premature infants. In addition to getting to know his patient families, he enjoys the great outdoors, Dr. Seuss, and BYU football. 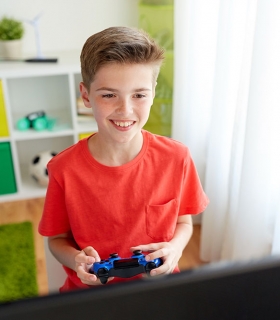 Copyright 2020, Utah Valley Pediatrics. All Rights Reserved.
The material provided on this website and websites linked from this site is for informative purposes only.
If you need specific medical advice or have an urgent need, please contact our office.